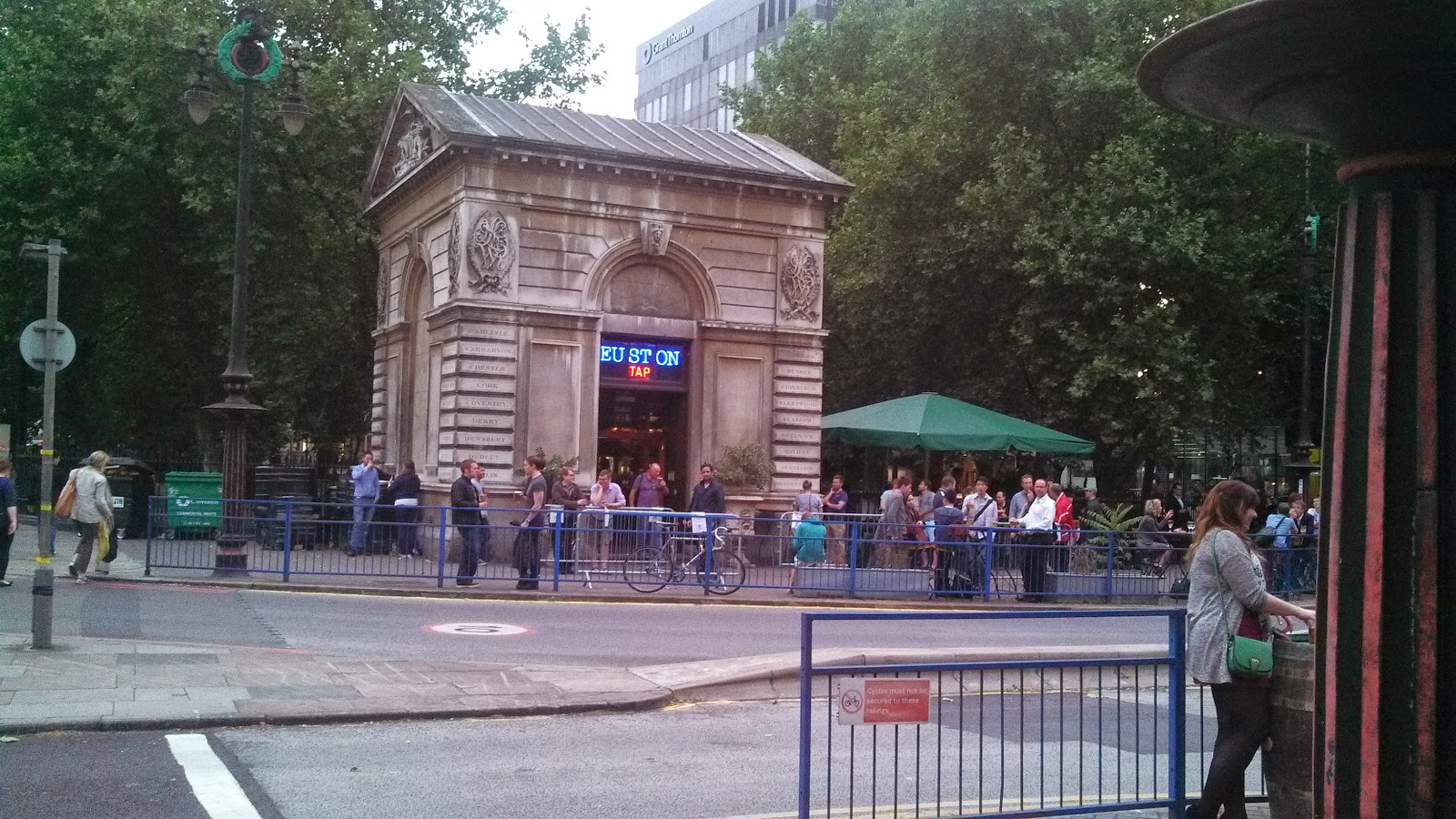 In recent years the London beer scene, and indeed the wider UK scene has witnessed an explosion in creativity in craft beer. So much so that there is a distinction (and friction) being created between those traditional Real Ale breweries and the craft beer breweries, and their fans. I noted in some CAMRA branch magazines in summer 2014 statements like "I brew Real Ale, not that fizzy kegged stuff called craft beer" with a certain degree of vitriol.

So with this in mind I returned to London in March 2015, on a trip devoted purely to craft beer (and catching up with college friends). On our travels we visited the Euston Tap, a must-see on the London tourist circuit never mind the beer circuit. There's a barman in the Tap by the name of Dave who is from Lucan. Anyone who knows Lucan will know it's now a big place, but Dave is from the part that is close to one of my favoured licensed premises, the Lucan County bar. Dave is very welcoming, especially if he hears an Irish accent. He also has a great knowledge of beer, and of the huge selection of beers that the Tap serves. In fact this is true of all staff in the Tap, which is very refreshing. It's as if selling bodacious beverages is a vocation and not just a job.

Dave recommended to me that I try a beer called Smoke Signals from a brewery in Berkshire called Siren, whom I hadn't heard of before. The beer is described as a dry hopped smoked sour wheat ale. Smoke in beer normally puts me off, as unlike with bacon I don't consider it a perfect marriage. I've had a few examples of grodziskie/grätzer, a historical style of smoked wheat beer from the Polish/German border and it hasn't floated my boat. More historic but also modern beers such as rauchbier from Schlenkerla, or even closer to home Smokescreen from Metalman, haven't lifted that boat either, so it was with some trepidation that I went on Dave's recommendation and ordered a Smoke Screen.

Whoa, this was not supposed to happen! The blend of quite an amount of sour bitterness with quite a lot of smoke actually somehow didn't not work. And then there's hops too! When I say it didn't not work, I mean I'm not sure it works, like smoky bacon works, but it works well enough that I'd have another. Thankfully Siren now has a distributor in Ireland (Pro Addition), though I haven't seen Smoke Signals here (yet).

So with my curiosity piqued I decided when I got home I'd try to brew something like this. Turns out with a bit of googling it would appear that Siren weren't the first to brew a smoked sour wheat ale. That distinction belongs to the good people of central Germany, in and around the town of Lichtenhain. Another historical style that is largely gone, there is an opinion that a Lichtenhainer is somewhere between a Berliner weisse and a grodziskie, though the historical records show that it was more likely that the sourness was developed in secondary, unlike with a Berliner. The rest is up for debate: how much wheat (if any), the ratio of smoked to non-smoked malt, and so on. Accounts differ. I presume the brewers at Siren read Ron Pattison's blog too, as Ron went into some detail about Lichtenhainer as far back as 2008.

Formulating a recipe should be fairly easy as we're under constraints that are largely due to lactobacillus being involved. The guys over at The Beer Files blog have done a pretty good write-up and have surmised:

As I said above there is some variation in the reports of what was in the grist and how much but while researching I found this page about Mark Schoppe's award-winning recipe. Mark won the 2012 Ninkasi award, which is a prize given by the AHA (American Homebrewers Assoc.) for the home brewer with the most amount of points in the final stage of the NHC (National Homebrew Competition), although it's not clear if this beer contributed towards that win, but it did win other awards. Ironically the BJCP sanctioned competitions give more points for beers that are closely follow their guidelines, but Lichtenhainer is one of the many styles missing. There is an update due to the style guidelines due in 2015, and it's good to see than Lichtenhaier is included in the 2014 draft.

Mark's recipe, adapted for my conditions is:


I've taken to boiling all my brewing water to precipitate some of the hardness, but my TDS meter generally shows around 130ppm which is far harder than I want it to be. To compensate I've started to use a lot more acid malt than usual. Longer term I plan to switch water supply completely.

Shortly after brewing this I met with Dean Clarke, purveyor of the finest beverages on behalf of Premier International to chat about a project I'm involved in. As if sent by God, Dean casually informed me over a 7-Up in the Salmon Leap Inn that he had a boot full of Lichtenhainer from German brewer Freigeist ("Free spirit") in the car park. Who would have thought someone else would have brought Lichtenhainer to Leixlip before I did! Freigeist are an offshoot of Cologne’s small brewery Braustelle, a part of the Brauerei Goller of Zeil Am Main. All their beers are on the unusual side, complete with 30's black and white horror movie type labels. Premier are importing these into Ireland and there is quite a variety, and all the the Lichtenhainer brews are under the Abraxas moniker. Most have fruit, but there is also a weisse . They're just starting to trickle into off-licences, so if you see one go for it.