Turbo cider is all the rage on the home brewing section of popular Irish internet forum boards.ie, and while I've tasted a turbo cider or two, I've always felt you can't rush perfection. Not that it's perfection but the Bulmers/Magners ad says "Nothing added but time"; they may be on to something.

This is a recipe inspired by one in American Sour Beers, but adapted to what I had available at the time and can't really be considered the same recipe.

This is an interesting brew in that the batch is split in half, one half is fermented with regular ale yeast, US-05 in my case, and the other half is spiked with lacto. When sufficiently sour both halves are combined to form the finished beer.


The water was boiled Leixlip water, with no other treatment. After five days the pH of the lacto portion had dropped to 3.4 which I combined with the ale yeast fermented portion, racked to secondary, and let condition for a couple of weeks with some light toast French oak chips. Once conditioned I kegged and force carbed.

Oud Bruin is one of my favourite styles of beers, Liefman's Goudenband and Rodenbach Grand Cru both being personal favourites, both of which I can usually get locally. A genuine Oud Bruin takes a considerable amount of time to produce, spending years ageing in stainless steel tanks, and it shows, as this is where my version of of this recipe falls down: its lack of depth. While it's very drinkable it's sort of one dimensional and probably has more in common with a Berliner Weiss than it does with the real thing. There is a slight astringency from one of the dark grains, I'm not sure which, but I think next time I'll use all Belgian grains. And it's also slightly too dark. The final beer pH is 3.9 which isn't overly sour but all in all not a bad brew and one worth tweaking. 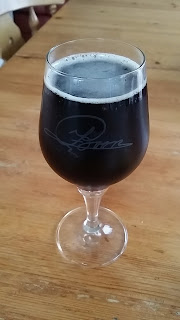