A Day Out in Leitrim!

Carrig Brewing Co (the only brewery in my home county of Leitrim) purchased the Wolf Trap in Tullamore late last year and are redeveloping and re-opening it as Tanyard Lane next month (March). To mark the occasion the owners invited some lads from around the area to travel to their brewery in Drunshanbo, to brew a beer of their choice on their 80-litre pilot kit, which in turn will be served at the launch. Props go to Liam Tutty, logistics man extraordinaire, for making it all happen.

The recipe is for a beer built by local Tullamore man Brendan Kenny, a 6 percenter oatmeal and coffee stout. The brew is unusual (to me) in that it has lactose too, so I suppose that kind of makes it a coffee oatmeal milk stout!

Around 20 or so of us beer enthusiasts travelled from all over to Drumshanbo for the day in the brewery. Thankfully everything went to plan. After the brew day was finished, it was off into Carrick-on-Shannon for some happy pints in Carrig's own bar, The Barrel Store, followed by some more in The Oarsman. (One of the owners of The Oarsman, Ronan Maher, and I, were great friends in primary school, but it will interest any readers to know that they are in the process of becoming a full blown brew pub... watch this space). Any craft beer fans ever in Carrick, there are only two places that serve a decent selection: The Barrelstore and The Oarsman. I highly recommend both!

A big thank you to all the folks that made the day such a huge success!

Some photos of the day... 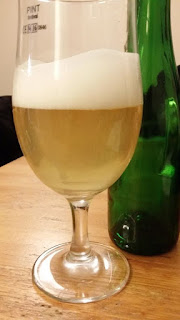 I want to give Steve Lamond (BeersIveKnown) a bit of a leg up on this. Steve is Beoir's Cider Officer. It's a tough job but fair balls to him, he's gone and organised their first Cider Competition, which is open to professional and amateur cider makers. I think some amateur cider makers in Ireland are past the Hail Mary stage, and some aren't, but several of the professionals are producing truly excellent stuff which has already won many awards.

I hope Steve himself is judging as he was at Sourfest, as his palate is truly exceptional.

The entry page is here, make sure to read all the background stuff. Judging will be April 22nd with entry closing a week earlier.

Don't let the BJCP-look to the site put you off, BJCP is not in use.