Some of you will know that I've relocated to Salt Lake City, Utah, for the summer. I had the pleasure of writing this piece on the train from Chicago to Salt Lake, a 1400 mile, 41-hour journey across Illinois, Iowa, Nebraska, into Denver (Colorado, for a brief stop) and then across the breath-taking Rockies and on to the Promised Land of Utah. It's a trip of a lifetime and one I would recommend to anyone... Amtrak even have decent craft beer on board!


Mark Nixon, the main man at the new and very impressive Hope Brewery, asked me to do a fruit sour with him after the success of Chloe Dancer. Mark (and Niall Maher of the Corkscrew at Kenny's) had tasted Chloe in Kenny's and really enjoyed it. (Though in fairness they had listened to me blowing off about it for long enough too.)

Mark wanted to produce a dry hopped mango and passion fruit sour beer that had the tart fruit sourness of Chloe but also nodded in the direction of Siren's excellent Calypso, and more importantly one that would be zymurgically unrisky, i.e. the yeast was to be US-05. The reason: so that no commercial brewery would be reluctant to brew it. (As you probably know I have almost universally replaced US-05/WLP-001 with WLP-644 in my brewing)

So I brewed a sour base beer, with a grist of around 25% wheat malt and 75% pale. Pre-acidified and then soured for a couple of days with a mixture of pro-biotic lacto caps down to pH 3.3. I made a yeast starter of half-and-half regular wort and soured wort as I didn't want to acid shock the yeast. I suspected the yeast would be fine as I've fermented pH 3.4 apple juice from our cider man Davy with US-05, but I decided I'd not take the chance. Belt and braces as a risk-averse work colleague used to say.

Once fermentation was looking healthy and well under way I handed the batch to Mark for fruiting. I suggested he split it in two and use mango in one half and passion fruit in the other, and then try blending, rather than putting the whole lot in one brew. Two weeks later we tasted the fruits of our efforts (bad pun intended) and concluded that the mango version was a bit whoaaa! Very mango, it probably could have done with one tenth as much purée to be a beer, but was it was it was definitely one of your five-a-day! The passion fruit on the other hand had nods to Chloe and to Calypso, I think the latter was due to dry hopping. But either way we felt we had out beer.

As timing would have it Mark was between breweries (most readers will know Mark was Head Brewer and Master of Recipes at Trouble for two years prior to joining Hope) when he mentioned it to Declan Nixon of Yellow Belly in Wexford, who suggested it be brewed there. The brew day is well photographed and documented on Yellow Belly's website/blog, so I won't go into it again. Needless to say we had a blast: the whole crew at Simon Lambert & Sons made us feel very welcome but special shouts out to Nicky, Seamus and Danny. Gentlemen, one and all.

So I'm not going to give the recipe for Castaway away, but this should land you in the ballpark. Feel free to dial up the passion fruit and sourness for a hardcore experience, dial it back for something closer to what you might have had before. Either way you'll get an enjoyable beer.

At the time of writing Castaway has clocked up 4.22 on Untappd, neck and neck with Chloe Dancer. It's nice to be associated with both :) 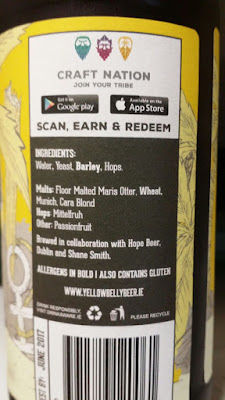