What do The Púca and Chloe Dancer have in common?

March 5th 2016 was Boundary Brewing's first birthday party. For any serious Irish beer lover there was only one place to be: Brewbot in Belfast. The best of the best was on show: a tap take-over featuring Boundary's full range, along with great brews from Simon Lambert & Sons, The White Hag, and Galway Bay.

For me it was the first public outing of my winner of Sourfest 2015, brewed by myself under my good friend Matthew's watchful eye at Boundary, and what a buzz it was. Due to scheduling it didn't go on tap till late in the evening, 9.30pm, by which time John The Beer Nut Duffy was on the last train back to Dublin. Misfortunate as I really wanted John to taste it. Howandever. Taking position on Tap 3 it was a wonderful experience to hear people at the bar say "Tell so-and-so the raspberry sour has gone on" and two hours later it was equally gratifying when Steven Barr, my main man behind the bar, told me "It's all gone". Live fast die young. Since then it went on sale in Glasgow and London where the reception was equally as prompt!

Chloe racked up a healthy 4.32 (currently 4.22) on Untapped once the votes from the launch night were verified, making it one of the highest ranked beers from Ireland. 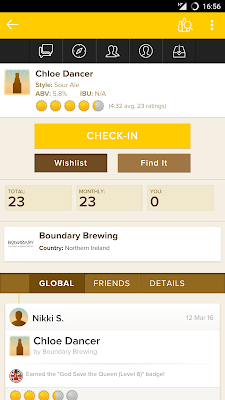 So to answer the question: What do The Púca and Chloe Dancer have in common? Well, the pre-acidification method I used in Chloe Dancer is also used in An Púca. I find it works very well with fruit sours, but of course Joe used it in his own way and has produced another wonderful beer. Chloe has opened doors for me.... watch this space! #Leviathan

The Púca is fairly widely available as The White Hag's batch size is much bigger than Boundary's. If you see it, buy it, you won't regret it! And Boundary's other beers are as awesome as ever.
Posted by Shane Smith at 22:41 1 comment:

Simcoe. A cat pissy, dank, hipster hop that is on nearly every page of BrewDog's DIY Dog. It's impossible to get off contract and even if you do have a contract it may not be entirely fulfilled. Going on BrewDog's published recipes it's easy to see why there might be a shortage: they use a huge quantity.

I was fortunate though to be given quite a lot of Simcoe this year, so much so that I've had to give some of it away in turn. But one thing I wanted to do was a SMaSH, or close to it, that wasn't just stuffed to the balls with hops. It's so easy to give into temptation and shovel them in, but I wanted something more svelte.

Consensus is that Russia River's Row 2 Hill 56 is a damn fine example of a single hop Simcoe pale ale. Deriving its name the row and hill on the hop farm in Yakima where it's grown, it's draught only and only available in the US. So I haven't had it (yet), but that's something I plan to rectify shortly. The recipe below is drawn from a number of internet sources.

20 litres. Single infusion mash at 66°C for one hour, and boiled for one hour. Cleared with gelatin.

Crystal clear thanks to gelatin with excellent retention and lacing. An unexpected and wonderfully delicate hop aroma and flavour with none of the cat-pissy dankness I've come to associate with the likes of Simcoe, Galaxy, Citra and a couple of others. If you're looking for a simple sessionable hoppy pale ale, this is it.
Posted by Shane Smith at 10:51 2 comments: