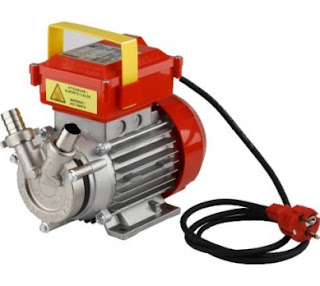 Summer 2015 I started looking in earnest for a pump to replace my "solar projects" P.0.S that I
blindly bought on someone else's (bad) advice. That pump has never been much use as show it a speck of grain and it jams... and jams so well that the only option is to drop what you're doing and dismantle the damn thing. Once people realise they're garbage and they want something better the usual advice is to buy a Chugger. That has always struck me as odd though, as in all my time spent in micro-breweries I've never seen a Chugger pump; their recommendation seems to originate from the US, where they're made, and where of course they don't have European pumps. So using a US-made pump in Europe doesn't seem to make sense when we have plenty of European made pumps up to the job.

Enter the Novax 20 B from Italian company Rover Pompe. A semi-professional pump intended for transferring beer and wine. The Novax bit means it has Viton® seals, which can be operated at higher temperatures than their regular transfer pumps. I've done a comparison of the home brew Chugger model and the Novax 20 B below, though the 20 B is equivalent to a higher model.

I picked mine up for €102 including shipping from here in September 2015, so this is a long term review.

As can be seen in most ways the Rover Pompe model is superior. Magnetic drive is normally preferable but with food grade seals and bearings along with thermal protection and reversible operation direct drive is probably more beneficial. I use this pump for whirlpooling without issues. The body of the pump is passively (fins) and actively cooled (yes, it has a cooling fan!) so I haven't checked the pump body to see if I'm exceeding the 95°C but it works flawlessly. Viton® has a working temperature of twice boiling point.

Now that I've been using my Novax 20 B for several months I can say the things I like most about it in order of preference are:
Being as powerful as it is this pump will collapse silicone hose on the inlet quite easily due to negative pressure (the manual does state that reinforced hoses should be used). It also pumps way too fast for a lot of jobs, like transferring to the fermenter. There is a version of the pump with a built in bypass valve that can reduce flow by 50% but my understanding is that it's not reversible, and it costs about €35 more. However fitting a throttle valve to it is a simple job. A €6 ball valve from B&Q along with a 3/4" rubber washer and we have a factory-look throttle valve that works perfectly. Note: if doing this you should only throttle the outlet. Throttling the inlet does no harm to the pump but it doesn't work well. You should never throttle the inlet of a pump which can't be run dry like a Chugger as you risk damage to the pump.