Boundary Brewing Co-op turns one this year and to celebrate the taps at BrewBot Belfast are being taken over for the evening by Boundary and friends, starting March 5th at 6pm, and I'm super excited that Chloe Dancer will see its first public availability on tap. 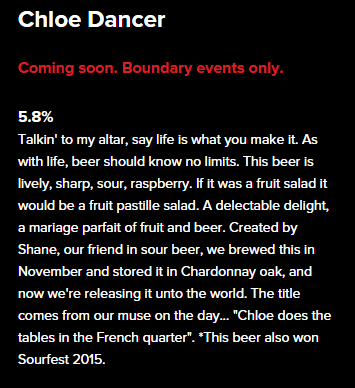 White Hag, Yellow Belly and Galway Bay Brewery will also be on the taps and the brewers will be there to chew the fat. I'll be there too, if you want to stop by and say hello.

Chloe Dancer is extremely rare (for now*) but I'm delighted that a keg is also going to BrewDog Clapham Junction as part of their St. Patrick's week celebration, as well as The Great Scottish Beer Celebration, which is to Glasgow what Indyman is to Manchester.

Boundary's Specials (Border Hopper No. 2 will also be at Brewbot)
http://boundarybrewing.coop/specials


Barrett Tillman is an award winning US homebrewer who took the unusual steps of finding someone to dry his yeast, lacto and pedio mixes and then release them commercially as dried sour mixes. I ordered the full gamut towards the end of last summer and have been slowly getting around to them. Barrett is a nice guy, I've had a few exchanges with him via email and he even went so far as to include a hand-written personal note with my order. From reading on-line, this is not unusual. Great to see someone who knows customer service out of the box. 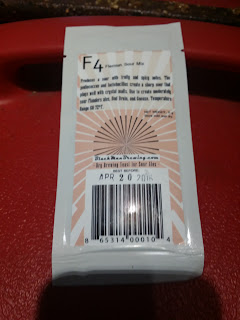 The first brew I did was with A4, the American Sour Mix, and I wasn't happy with the results. I didn't blog about it as basically the screw up was my fault. I left the beer to develop in my shed which was too cold for the lacto (probably no more than mid teens centigrade at the best of times), so the sourness never developed. In an effort to kick start it I raised the temperature to around 28°C at which point I was too late, and the yeast just gave off peppery phenolics which some people liked but I didn't care for... and the end result was a million miles from where it was supposed to be.

Early last November Roger (second best sour brewer in Ireland ;)) contacted me to see if I'd be
interested in contributing a Flanders Red style beer to the ex Bushmills barrel in his shed. I hesitated as that barrel used to be in my shed and the Imperial Stout that was in it achieved a whopping 93% attenuation on Nottingham Ale Yeast, clearly not right. Additionally Roger's shed is like mine, unheated. But in the end I said feck it, Roger's a good brewing mate whom I've known for a long time... I'll double batch and it'll give me the chance to try the Blackman F4 Flanders Sour Mix.


A handful of shitty hops in the mash. Roger's original recipe called for EKG which I didn't have, but I have plenty of stale hops for this kind of brew. 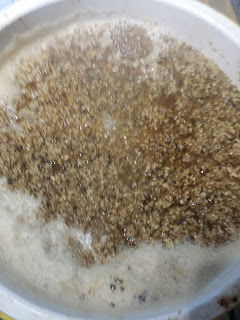 The mash was fairly thick but I hit all targets, and after a one hour boil I hot-filled two 25 litre jerry cans and left them to cool overnight. Next day the one for Roger got a dose of Mauribrew 514 Ale Yeast and mine got the F4.

This time I decided that the fermenting beer would stay indoors, close to a radiator (just in case!), and I'd be in no rush to move it out. Within a day there was a good krausen on the F4, but that didn't really concern me as the A4 did something similar. It was the lacto and pedio that I was concerned about.

Fast forward almost two months and it's time to taste. The results this time are far better than the A4 and the extra warmth of the kitchen seems to have helped. There is a pronounced lactic acidity, no perceivable acetic acid, and the pH of 3.5 confirms that it is moderately tart. The gravity has dropped to 1.021, but with the bacteria in there it's not necessarily 7.06% abv as some of the sugars are now lactic acid, not alcohol, but it's not far off. It's also kind of murky, I'm not sure if it's from me hoofing it around or from the no-chill, it doesn't really matter either way as it's not for drinking yet. Also, and a first for me in any beer, is a huge bang of autolysis, i.e. a strong Bovril flavour. 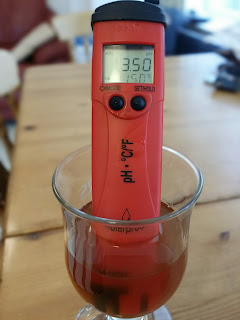 As there are no Brettanomyces strains at all in this Barrett recommends adding some for added complexity, by way of bottle dregs. I would agree: there is no funk or hint of funk in this beer, and nor will any develop. I think in this case I would go even further and say that brett is not optional as that autolysis needs to be cleaned up, and brett is known for feeding on dead yeast cells.

I always keep a stock of dregs, but unfortunately none are from the Roeselare, but when racking this off the yeast cake I did have a good stock of Hanssens Artisanaal dregs from their Oude Geuze, which is particularly plentiful where I live at the moment, and quite reasonable too at €4.20 a 375ml bottle to take away.

Hopefully time will improve the wobbly start that F4 got off to. These kind of beers are best not rushed anyway, so the racked beer has been put into storage to be revisited in 2017.

Well I'm glad to say the Hanssens dregs were obviously alive and kicking as a nice pellicle has formed :) 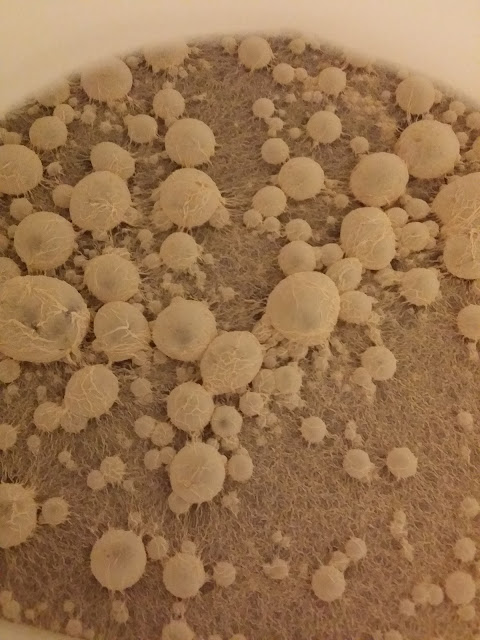