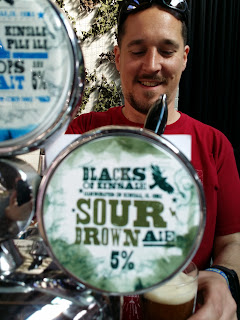 I don't normally do beer reviews, but I decided to make an exception as these brews are available right now for you to try in the RDS.

First up we have Sour Brown Ale from Blacks of Kinsale. This is a batch of their Jester Brown Ale which has had a mixed sour culture from White Labs added to it in secondary. Jester is an exciting new British hop from Charles Faram's breeding programme which makes either version of the beer worth trying in themselves. The soured version is only ever so slightly sour as Sam Black, the brewer and owner, told me. The mixed culture was only added three weeks ago, so this is definitely one for keeping and letting the sourness develop. It's ever so slightly acetic on the nose, but not in a bad way. Worth trying, and if you can take away some in a growler and let is age. 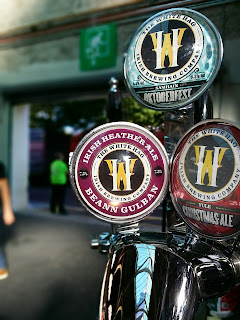 Next up is Beann Gulban from White Hag. I sourced some wine barrels a while back and Joe Kearns, the head brewer in White Hag took two of them. Joe has blended a very acidic batch with a less acidic one, and has been aged the blend in one of these barrels. The uniqueness doesn't stop there though. Beann Gulban has no hops at all (yes you read that right), instead it has a huge amount of heather flowers added to primary and when the conditions (pH and gravity) are right Joe pitches the yeast. All the sourness is coming from the heather, and it is definitely lactic in nature, with the oak adding an extra dimension, a truly wonderful beer.

Joe also brought along the very acidic batch in a corny keg for "special guests", whoever that could be ;) This is proper hardcore Beann Gulban the way I like it, and being honest I personally prefer it, but it may be too tart for others. 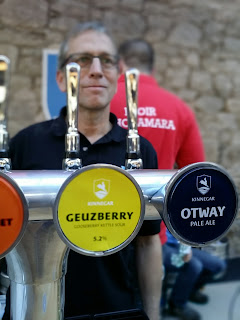 I made my way over to Kinnegar's stand and had a good chat with Rick Lahart about his latest creation, Geuzberry. The wort was pasteurised and then kettle soured with yoghurt probiotics and fermented out with a neutral yeast, and for a final twist there are locally grown gooseberries added. It's like a strong (ABV-wise) Berliner weisse, and is properly tart. Just like Berliners of old, Rick offers a variety of sweet syrups which can be mixed in to take the edge off, but says himself that he prefers it straight up. I didn't try the syrups but I can see why Rick likes it: again a beautiful beer. If you can't make it to the RDS this is also available in bottles in good off-licences but won't hang around long.

So this this is a snapshot of the Irish sour beer scene as of August 2015. It's great to see the number of sour and less conventional beers increasing as the market becomes more open to new ideas. We're not quite Belgium yet, but we're heading in the right direction.

Foot note: Not beer related, but Blacks have also become a licensed distiller, bought a still, and are producing spirits in small quantities. I sampled their poteen and decided I'd procure a bottle as it's top notch stuff. Very limited availability (there were only a handful of bottles left) so I'm sure it'll become collectable. 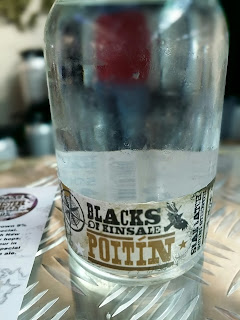