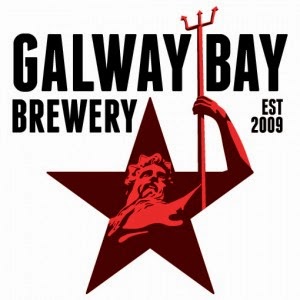 While I was in Galway recently I took the opportunity to hook up with Tom Delaney, home brewer turned pro brewer, and full time employee with Galway Bay Brewery. Tom is like myself with an interest in sour beers, but is lucky enough to have an employer that allows him limited scope to experiment with sour beers, the first of which was a "dark sour", or a sort of black Berliner Weisse style beer titled "Heathen", released shortly before Christmas 2014. Crossed wires and an unwillingness to travel too far from the bus or train lines have so far conspired to prevent me from sampling Heathen, but the reports from t'internet so far seem to indicate that even at a diminutive 3% it is a very good beer indeed. To date it is only the second intentionally sour beer brewed commercially in Ireland (the first being Scarlet from White Gypsy).

I met Tom at the brewery in Ballybrit Industrial Estate in Galway city where he gave me a tour of the facility and explained his process. Tom makes up a starchy wort of mostly barley malt and torrified wheat, and then spikes it with a couple of scoops of Weyermann acidulated malt. Acid malt has undergone a process at the maltster whereby lactic bacteria that naturally occur on-grain are encouraged to grow and produce lactic acid. The process is halted once the desired levels are reached. This lactic acid then remains on the grain and can be used to all sorts of effect in brewing where lowering pH is required. It's not strictly speaking wild, as it's restarting a process Weyermann had put a stop to, but it produces some fairly good results, and it's reasonably predictable (read: repeatable). Tom relies on taste to determine when the acid levels are to satisfaction rather than measuring pH, sampling every couple of hours. He makes sure the wort is protected from an onset of latent acetobacter by keeping head space filled with nitrogen gas. When he's happy with the level of sourness, usually within 20 to 30 hours, the boil will take place to kill everything and halt the progress of the lacto (and anything else). The boil is 15 minutes and the hops are added once the boil starts rolling.

Long single infusion mash at 65°C (simpler than a step mash to save time, but if you wanted you could do a step mash at home), wort is transferred to kettle and cooled to 40°C, where it's kept till nice and sour as outlined above.

An unusual feature of Heathen is its colour, which was the idea of Chris Treanor, the head brewer at Galway Bay. Tom says


For blackening I cold steeped 25kg Carafa III for 16 hours. I used a very large fine filter hop bag in my mash tun. All this thick black syrup gets added to the boil kettle. That full bag blackened 1300 litres of pale wort. Not sure what that works out at on a 5 gallon level.

Gordon Strong would be proud! (Gordon advocates not mashing dark grains) For a 20 litre batch that works out about 400g.

After the 15 minute boil is finished the wort is chilled to 26°C and Wyeast saison yeast is pitched to finish the job, as it's one of very few yeasts that can operate at such a low pH. (Danstar Belle Saison tried and failed!)

This is the kind of beer that doesn't benefit a lot from ageing so it's force carbonated to a fairly high level and served fresh in the brewery's tied bars.

During my visit to the brewery it was nice to get a taste of a sour IPA from the fermenter, another one off, this time Chris's concept, soured in a similar way to Heathen, and only missing a name at this point. Full of grapefruit and orange citrus tang, this quite tasty brew should be making its way to Galway Bay bars soon.

While Galway Bay Brewery is not set up for full sour production, replete with barrels and brett, it is great to see experimentation and a willingness to venture outside the holy trinity that so many other breweries are constrained by.

Lambic: Brewing Up A Barrel - Part 1

One of the benefits of being involved with like minded people in the locality is that a project which is out of reach for one person is not necessarily out of reach for a group. In fact it might be perfectly suited to one.

We had previous experience as a group brewing an imperial stout and ageing it in an ex-Bushmills whiskey barrel (itself and ex-bourbon barrel from the US), which I had the pleasure of homing in my garden shed for around 8 months. Indeed it surpassed all expectations and gave me the determination in January 2014 to reach higher with the next brew: a bona-fide, barrel aged lambic. The first barrel of lambic anywhere in Ireland ever.

So I asked around as to what would be a suitable barrel. The Bushmills barrel was ruled out straight away as being too flavoursome. Ironic, but nonetheless true. Following up an imperial stout which itself had followed up cask strength whiskey would result in too much flavour being imparted into the lambic. What we needed was a wine barrel.

Sourcing a wine barrel
A quick Google lead me straight to Kelly Wine Barrels in Tipperary who stocked a wide variety of fresh barrels in very good condition. A quick call to Tom, a fellow sour beer fan from Tipperary and one of the local home brewers was dispatched to Tipperary in his Citroen minivan. €90 and a few hours later he arrived back at my house with a fantastic Spanish oak barrel. I'm not sure what was in it beforehand, whatever it was, it was red. Probably wine but it might have been port. Either way the barrel was perfect.

Yeast
While the barrel was being sorted research was going on into a suitable "yeast" to use, eventually settling on East Coast Yeast as a supplier. ECY is a relative newcomer to the scene, and well received in their native US. I say "their" but it appears ECY is a one man show as the only person we dealt with over the next few days was Al Buck. Al had never shipped to Ireland before and we had never bought yeast directly from the US before so there was a bit of flaffing around before we eventually found expedited shipping for a reasonable cost. Once we did we fired off our order to Al, and simultaneously ordered our oud bruin barrel pitches.

Two days later ECY01 BugFarm (and ECY23 Oud Brun, more on that later) arrived, packed in a well insulated box with cool packs. Receiving goods from outside the EU can raise a demand from Customs & Excise for duty and VAT, but fortunately such a demand didn't materialise in this case. Each pitch is 125ml and as we bought one pitch for every 20L that would be in the barrel we didn't need to make a starter. It's important not to make starters with pitches like this or with White Labs WLP655 for example, as to do so will throw the ratio of organisms out of kilter.


A mixed culture of wild yeast and lactic bacteria to emulate sour or wild beers such as lambic-style ales. Over time displays a citrus sourness and barnyard funk profile. Contains yeast (Saccharomyces, Brettanomyces) and lactic bacteria (Lactobacillus, Pediococcus). The Brett population is typically >50% of the culture pitch. The blend of strains change every calendar year for those who like to blend or have solera projects.   The 2014 version contains a wild Saccharomyces yeast, four brett strains, various lactobacilli and Pediococcus.

Recipe & Ingredients
Once we had the pitches sorted it was time to decide on the recipe which for a lambic would be very simple: just do what the professionals do: two thirds pilsner malt to one third unmalted wheat, neither of which are too exotic. Most of us had lager malt from the Malting Company of Ireland in Cork, but sourcing unmalted wheat required a trip to the farm shop as it's frequently used in animal feed. (Sometimes I hear silly statements about animal feed not being "food grade" which is ridiculous -- if the animals can eat it and we can eat the animals, then it's food grade). Fortunately there's a Glanbia farm shop in Mullingar where a 25kg bag can be had for the bargain price of €5.75. Glanbia farm shops are located all over the country except really for the Dublin area, but are well worth a visit if you're looking for grains. The only other requirement was some old hops, which wasn't a problem between us.

Popcorn
I think it's appropriate at this point to mention "popcorn". The lady in the shop said the wheat might have acid on it, that he would know when he opened the bag if there was a waft from it. This was news to us and generated a bit of consternation. I phoned my college buddy and farmer Fergus in Wexford to ask him what that was about. Fergus informed me of propanoic acid which is better known in farming circles as "popcorn". Propanoic acid is a harmless naturally occurring acid which is applied grains to stop them from sprouting in storage and was nothing to be concerned about. You can read more about it on Wikipedia

The Mash
What a lambic gains in terms of grist simplicity it loses again when it comes to the mash schedule. A turbid mash is what's used by most lambic brewers, seemingly to make a cloudy wort with plenty of long chain carbohydrates. With that in mind and after doing a lot of research, this mash schedule was was basically copied from Wyeast. (Edit 01/01/15: In hindsight, this is needlessly complicated)

Step 2 requires applying heat directly to the mashtun so would only work for those brewers who had the right set-up, namely metal pots. Roger didn't, so he designed a multi step infusion mash schedule which is a lot simpler as each step just requires adding the right amount of water.


Of course the actual quantities added depend on the the size of the grist.

Coming up Part 2 - The Brew Day

Well, I've been meaning to do this for a while. Start a brewing blog that is, but I didn't want to do a blog if it was going to be just another blog about brewing. There are enough of those already!

My esteemed home brewing (now pro brewing) colleague Matthew Dick introduced me to sour beers in Dublin's WJ Kavanagh's in early 2013 and the beer itself was a revelation. Since then I have found myself obsessed with sour beers, with a matching thirst for knowledge. Little did I realise at the time how fascinating a world it would be, with the multitude of organisms far beyond Saccharomyces Cerevisiae. It happened almost by chance. And for that I thank you Matty my man.

Through this blog I plan to chronicle my experiences of brewing sour beer. I plan where possible to do as the Belgians do and kick off some spontaneous fermentations for some truly local brews, some of which I started before this blog, in the hope that it would be useful to other brewers of sour beers, especially Irish ones.